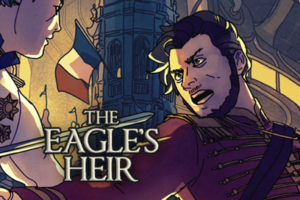 Choice of Games’ latest release will be The Eagle’s Heir by Amy Griswold and Jo Wyrick. The Eagle’s Heir is a steampunk alternate history game of political maneuvering, airship adventure, and romantic intrigue. Will you bring liberty to France, or plunge Europe into bloody war? I sat down with the authors to learn more about their game and their experiences writing interactive fiction. Look for The Eagle’s Heir later this week, releasing on Thursday, March 30th.

Eagle’s Heir is an alternate history or uchronia, in which Napoleon actually won at Waterloo. There’s also a bit of a steampunk flavor to it, because in this world there are airships used in combat situations. It’s a very fun, very exciting world. Tell me what drew you to invent it.

Jo: I’ve been writing in this period for a long time with my Wars of Revolution series of novels, The General’s Mistress, The Emperor’s Agent and the forthcoming The Marshal’s Lover. Madame St. Elme (grandmother in The Eagle’s Heir) is the main character of that series. As I work on it, I asked the inevitable question “What if they’d succeeded? What if Elza and her friends had won?” One thing that was clear to me in telling her story is how very close they came to winning. It only takes a tiny tweak here or there.

The point of departure in The Eagle’s Heir is that on the second day of Waterloo, d’Erlon reinforced Reille at Hougoumont Farm, forcing Wellington to withdraw from what had become a trap for him. Wellington pulled back before Grouchy arrived, allowing Ney to defeat Grouchy when he came up unsupported. Wellington then retreated to the Channel, as British Expeditionary Forces do, allowing the French to take Brussels. This caused a crisis in Parliament and Castlereagh’s government fell. A Whig Prime Minister was asked to form a government, and he signed a more favorable peace with France than the Tory government actually did in 1815. Consequently, Napoleon has remained Emperor for twenty years. He has embraced technological superiority, including giving free rein to the inventions of American Robert Fulton, which has caused a leap forward in steam power. As the game opens, France, England and Austria have been engaged in something of an arms race to the air.

One of the things I love about this world is that it’s not fantastic at all. It’s our world with tiny, plausible changes. Many of the main characters, like Alexandre, Victoria, Conroy, Madame St. Elme, and Franz, are all real people. Many of the others are based closely on real people as well. For example, the fascinating and romance-able Julien Lamarque, the news reporter, is based on young Alexandre Dumas, author of The Three Musketeers. I hope players will enjoy this visit to a world that might have been.

Amy: I’m always fascinated by the Victorian era and its mix of the entertainingly strange and the frankly awful. Here we’re at the boundary between Regency and Victorian, with Princess Victoria about to ascend to the throne (or not, depending on some of the players’ choices!) –the period of early Charles Dickens and the setting of Les Miserables. There’s a tremendous amount of energy devoted to the idea of “progress,” and a great deal of flailing around trying to define what progress might look like and what price should be paid to achieve it. Playing in an alternate universe lets us explore some different ways that people might have tried to change the world.

Also, it lets us have the heirs to Napoleon’s empire battle it out in airship combat over the Tuileries, which was just too much fun to pass up. 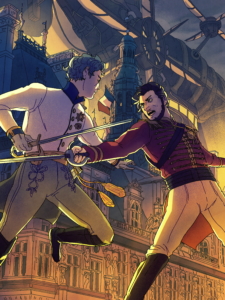 As a writing team, how did you divide up the work? Do you prefer writing with a partner and how did you decide to do this project together?

Jo: Amy does the coding and we divide up the writing by chapters and scenes. For example, the country house party is Amy and the pirate attack is me. The theater scene is Amy and the scene with Napoleon is me. (I love writing Napoleon, and I’ve written him quite a bit before.)

Jo and I have co-written a number of times before, particularly on the Stargate Legacy series of tie-in novels for Fandemonium Books, and I enjoy it. It’s great getting to bounce ideas off each other and work out a story together, and I think we both brought our own strengths to this project; I’m more comfortable with the coding, and Jo’s experience writing and running tabletop role-playing games was very useful in our game design.

What did you find challenging about the process of writing in ChoiceScript/our game design?

Amy: There was definitely a learning curve involved in learning ChoiceScript, and I’ve gotten intimately familiar with pretty much every error message ChoiceScript can produce (plus the error messages I inserted to check for certain persistently recurring bugs, like “You shouldn’t be buried if you haven’t died!”) In terms of game design, experience with tabletop RPG campaigns where early decisions can lead to numerous possible states for later situations was very helpful. Probably the biggest challenge was making sure that there weren’t “wrong” choices – that every choice a player could make had advantages (and, usually, also disadvantages).

Jo: I love a bunch of Choice of Games stories, and I’ve been playing a while. My absolute favorite is Choice of Alexandria! I also love Affairs of the Court (which I’ve played through twelve times!), Choice of Broadsides, Choice of the Rock Star, Hollywood Visionary, and Saga of the North Wind.

Amy: I also particularly liked Affairs of the Court, but I’ve enjoyed a number of the games from Choice of Games, and I find Twine games generally interesting. In terms of narrative games defined more broadly, I’m a longtime player and fan of Fallen London and its Victorian space bats.

What are you working on next for Choice of Games?

Jo: Our next story is called Stronghold, and it’s high fantasy.

Amy: It’s a game about defending a town, finding a family, and building a community, and we’re excited to be starting the outline stage again with this project!